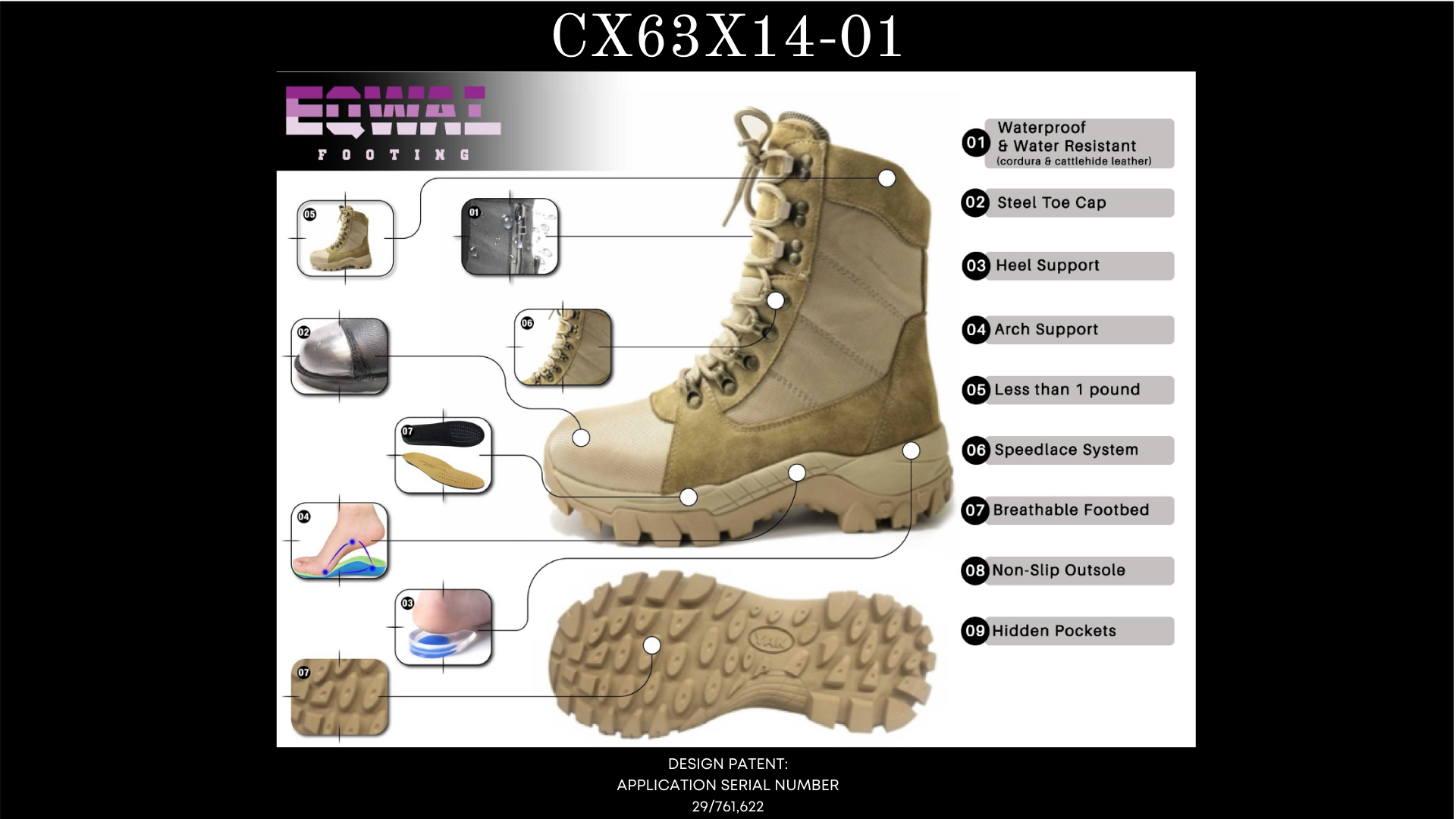 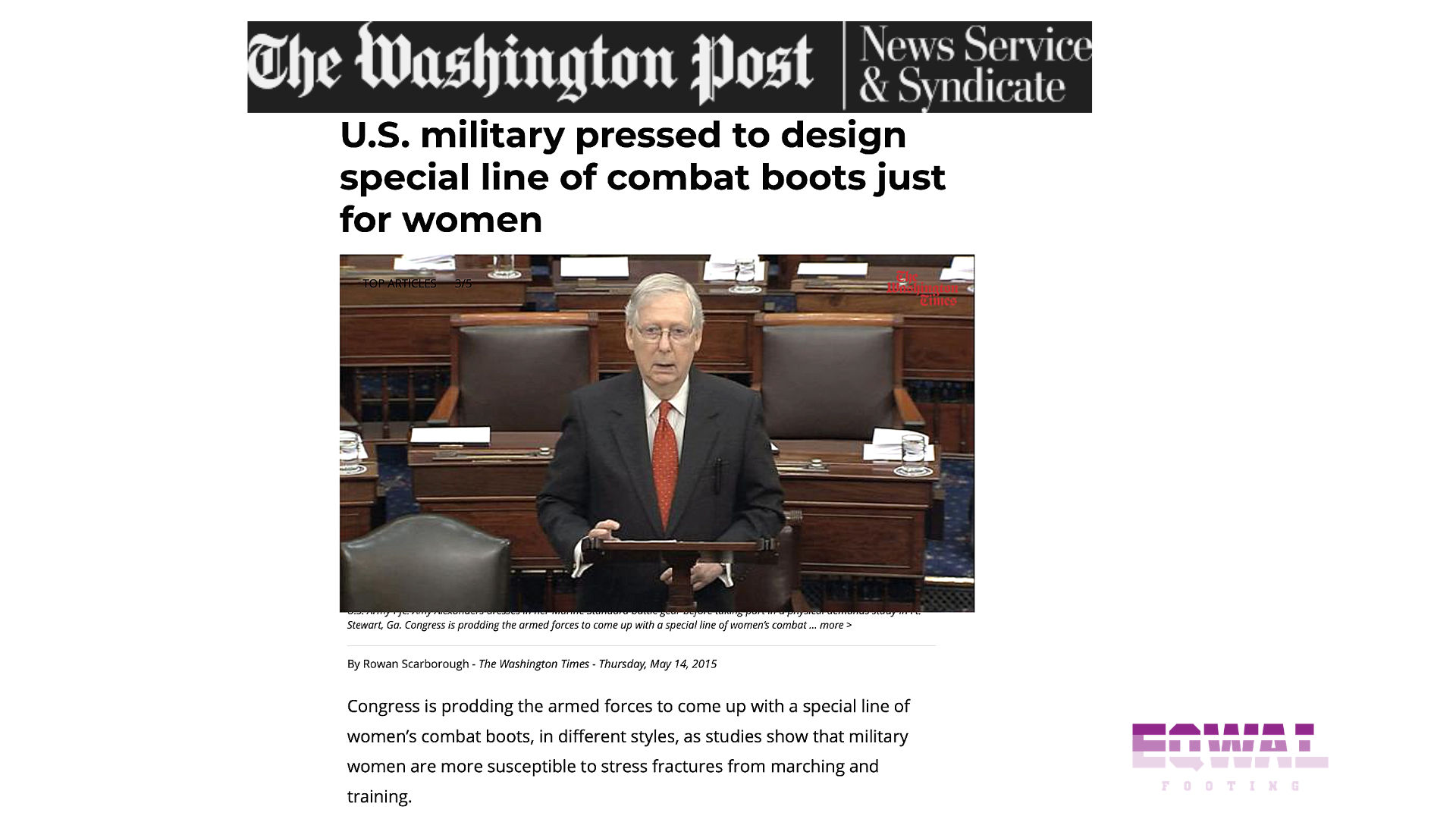 Congress is prodding the armed forces to come up with a special line of women’s combat boots, in different styles, as studies show that military women are more susceptible to stress fractures from marching and training.Female troops in Afghanistan have complained to a member of the House Armed Services Committee that they have limited options for acquiring combat boots designed for them.The congressional move comes as selected women have undergone direct land combat training to determine if they can meet tough physical standards to become an infantryman or a commando. Defense Secretary Ashton Carter predicts that he will open most, if not all, such units to women by Jan. 1On the eve of such momentous social and battlefield change, Army women lack boots specially designed for generally smaller and narrower feet, say 10 congressional sources. The Army buys different boot styles for hot and cold weather, mountain and desert warfare and the rain.Prompted by the Obama administration’s 2013 decision to strike down a ban on women in direct land combat units, a new report by the Armed Services Committee on fiscal 2016 spending says it’s time to feminize the combat boot to increase performance in marches, long hikes and combat.

A spokesman for Rep. Niki Tsongas, Massachusetts Democrat and sponsor of the footwear provision, said the Army does not provide “a female option for combat boots.”“The congresswoman’s provision, however, encompasses all the branches by requiring the DOD to examine its ability to provide women-specific combat boots across all branches and devise a strategy to ensure that women are outfitted with the best combat footwear possible,” said spokesman Michael Hartigan. “A major part of that strategy will be an analysis of the adequacy of any female-specific combat boots that may already be available.”Army public affairs did not respond to queries.The congresswoman heard about the boot gap from female soldiers while on a visit to Afghanistan.“The committee believes it is important the Department of Defense ensure that female service members have equipment and clothing tailored to the physical requirements of women in order to operate effectively and not be hampered by equipment that is ill-fitting, uncomfortable, and potentially harmful during operations in the field,” says the committee report.  Stress fractures.  The report said the armed forces should plan to provide “a greater range of boot sizes and types for women service members as well as the advisability and feasibility of developing combat boots specifically designed for female service members.”Robert Maginnis, a retired Army infantry officer and author of “Deadly Consequences,” which argues against women in ground combat, said it is possible that women’s boots could cut down on injuries overall.“Specialized boots may help with stress fractures,” he said. “There are numerous studies indicating women are far more likely than men to [experience] exercise-related stress fractures.”Mr. Maginnis said he doubts new boots will help stem injuries from a basic military requirement: long marches.“Men and women walk with different stride lengths and frequency,” he said. “As I explain in ‘Deadly Consequences,’ when a mixed platoon of recruits marches at the male stride of 45 centimeters rather than the shorter female stride of 38 centimeters, there is an increased incidence of stress fractures of the pubic ramus [a part of the pelvis] among women. That finding was reported in the sports medicine literature in [the] early 1990s. Bottom line is new boots won’t do anything about stride-length issues.”Last winter, Elaine Donnelly, who heads the Center for Military Readiness, analyzed a new public report by the British military on women in experimental training for close ground combat. Great Britain currently bans women from such units, as the U.S. did until 2013.The report offered a rare glimpse into the physical toll combat training can take on women. The U.S. military closely guards the release of such data, forcing outside researchers to file Freedom of Information Act requests.The British report states: “The high and unaccustomed physical demands of initial training are associated with increased risk of Musculoskeletal injury (MSK) injury in recruits. The overall risk of MSK injury is higher for women, reaching seven-fold in some studies of British Army training.”The report also said “the rate of trauma and overuse lower limb MSK remains two-fold higher in women and the rate of hip and pelvic stress fractures is ten-fold higher in women (2.8 per 1000 vs. 28.1 per 1000 trainees).”

‘Best combat footwear possible’ The British press widely reported in 2013 that three young female recruits were awarded $162,000 each on their claims that being forced to march like men resulted in spinal injuries and pelvic fractures. The Daily Mail said other women have filed similar claims with the Ministry of Defense.Former Defense Minister Gerald Howarth told The Mail, “This case is completely and utterly ridiculous — it belongs in the land of the absurd.” Mr. Howarth said the women were awarded more money than soldiers who suffered serious wounds in Afghanistan.A 2011 study by three researchers at Florida State University found that military and athletic women in both populations experienced higher numbers of stress fractures than did men. For the military, men had a 3 percent rate and women a 9 percent rate.The House committee’s report on boots, Ms. Tsongas said, “requires DOD to examine its ability to provide women-specific combat boots and devise a strategy to ensure that women are outfitted with the best combat footwear possible.”

An advocate for military women, Ms. Tsongas also sponsored bill provisions ordering the Army to create a policy for workplace breastfeeding and requiring a Pentagon briefing on “its ability to provide the best prosthetics for female amputees while meeting their physical and mental health needs.”The Army boasts an extensive boot inventory. None is listed on its Program Executive Office Soldier website as being specifically for women.The site does list an “Army combat uniform-alternate for female and smaller-statured soldiers.”There is also a “female improved outer tactical vest” to go along with body armor.“The vest incorporates design changes that are more form fitting to female soldiers while maintaining fall ballistic properties,” the website says.